The NFL season is officially 25% complete. New England has been 100% successful. With four wins and zero losses, this team has exceeded expectations – well, mine anyway. Games may have been ugly and low-scoring (by recent Patriots offensive standards), but a win is a win.

The team seems to be in a state of continuous transition on both sides of the ball. Players are being rotated in, out and around more than NASCAR tires in a pit stop. 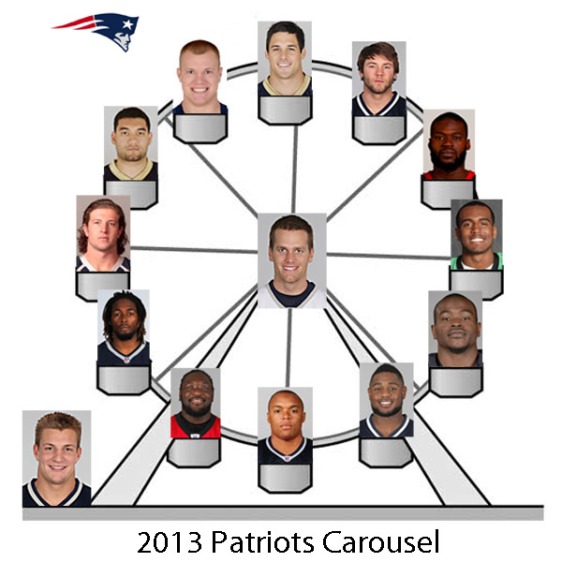 Clockwise from top: Danny Amendola, Julian Edelman, Kenbrell Thompkins, Aaron Dobson, Josh Boyce, Stevan Ridley, Shane Vereen, LeGarrette Blount, Brandon Bolden, Zach Sudfeld, Michael Hoomanawanui, Matthew Mulligan. Center: Tom Brady. Waiting to ride: Rob Gronkowski.
On the offensive side of the ball we’ve seen Welker out, Amendola in. Amendola out, Edelman in. Rookies Thompkins, Dobson and Boyce all in. The tight end position has featured Sudfeld, Hoomanawanui and Mulligan while waiting for the return of Gronk. And then there’s the running back carousel. Ridley, thought to be the feature back, has been supplanted by Vereen (now out for eight games), Blount and Bolden (returned after missing two games).

The defensive side of the ball has seen more consistency, but the Falcons game dealt the Pats a potentially huge blow with the loss of Vince Wilfork to an Achilles tear. Rookie Joe Vellano stepped up admirably, but it remains to be seen what level of play he can sustain.

I’ve been one of the few critical voices regarding Bill Belichick as a head coach due to the Pats lack of hardware, given all the talent he’s had over the past five seasons. Sure, they’ve been a great regular season team, but that has not translated in the big games. However, up to this point in the season, Bill Belichick should be in the running for coach of the year.

Getting back to a strong, consistent run game has given Brady more time to get his rookie receiving core up to speed and NFL standards, and Belichick’s finally found the right defensive personnel to execute pass coverage without having to loosen up on their tight run D. The linebackers have done an excellent job in pass coverage and the D line has been getting to the quarterback without resorting to all out blitzes. Cornerback play has stopped looking like it belongs in high school and safeties continue to play smart.

Perhaps the lack of superstar egos in the clubhouse has contributed to the team chemistry, but whatever’s going on in that locker room is clearly providing a true team atmosphere. Players are picking each other up and seem to be giving just a little more effort when the chips are down.
I’m starting to think Peter King’s Superbowl prediction may not be as ridiculous as I’ve deemed it. If the injury bug can be stilled for a few weeks, this roster has a real chance to gel into an exciting team on both sides of the ball. The receiving core has made vast improvements each week and the defense continues to make plays when they’re needed. Even the 23 points to Falcons wasn’t as bad as it looked. Twenty-three points to a team with a HOF tight end (still playing at an amazingly high level), two all-pro receivers, a sneaky-fast running back and a stud QB playing at their house is nothing to sneeze at. Especially considering the inability to recover a late onside kick and some truly exceptional catches by Julio Jones and Tony Gonzalez – where the defense had the play covered perfectly. Plus they stopped the Falcons four consecutive downs twice, including the game-sealing series with a minute to go (something they haven’t been able to do against any team the last five years).

The second quarter of the season has the Pats up against the Bengals in Cincinnati, the Saints at home, the Jets in New York and the Dolphins at home. With four wins already in the bag, the Patriots would do good to end the 2nd quarter with a 2 – 2 record. Ideally, the two wins would be against the division rivals, but I definitely see the Saints as being a little more than the Pats can handle at this point with their surprising defensive play so far.

The Bengals game poses a real problem. I will actually be in attendance at the game (strike one for NE), I’ll be wearing my jersey (strike two) and the Bengals are Jekyll and Hyde at the moment. If this game was in New England, I wouldn’t give the Bengals as much of a chance, but it’s in Cincinnati (strike three). My stupid superstitions aside (like I have any real effect on the game), the Patriots have a better than average shot at winning this game, which would go a long way toward easing the pressure of having to beat a surprisingly good Dolphins team.

If the Patriots stick to and execute their season gameplan on both sides of the ball, they could go into halftime with a 7 – 1 record (4 – 0 in the AFC East). This would be a remarkable feat. However, I suspect they’ll be 6 – 2 or even 5 – 3 at the break (3 – 1 in the division). Still, given the personnel carousel, this too would be pretty darn respectable and leaves them in a good position for making a playoff run.

One thing I’ll say for certain: this team is drilling away at my pessimistic foundation. Even I’m starting to believe in what this team can achieve.

Currently trending on Yahoo! is the story of an anti-social gorilla named Patrick. The headlines scream “Sexist Gorilla” and the stories explain how Patrick is to receive behavior therapy for his poor attitude. While it’s clear he has anti-social/behavioral issues, it’s a bit over the top to label him sexist.

Yes, he bit a female and was “aggressive” toward others, but he was also cold toward virtually every other gorilla he came in contact with, male and female. Apparently, the only gorilla he engaged with was Jabari, a gorilla shot to death for injuring three people after escaping the Dallas Zoo. Talk about behavioral issues.

Further, the Dallas Zoo recently acquired two males for which they have no space – unless they move Patrick elsewhere as they fear his behavior toward them.

Interestingly, Dallas Zoo officials praise Patrick for his relationships to humans stating he gets along with people better than other gorillas. He’s a proven fan favorite among zoo patrons.

The problem isn’t that Patrick is sexist – it’s that he’s specieist.

No, I did not make that up. British psychologist Richard D. Ryder coined the term in the ‘70s, arguing that specieism occurs when humans make negative moral distinctions between themselves and animals.

In Patrick’s case, he appears to be making negative moral distinctions against his own species. I don’t know if that makes him a reverse specieist, but it certainly does not make him sexist.

But the media, being the media, needed to sensationalize the headlines in order to get people to read the stories. “Specieist Gorilla to Receive Therapy” just doesn’t have the same ring as “Sexist Gorilla.”

It’s a trivial rant, I know, but I’m nothing if not a media-ist (yeah, I coined that), and it compels me to point out the ridiculousness of such tactics.

The grimace is due to the following injuries: back, forearm, wrist, groin…

NFL Opening Day 2013 should give every Patriots fan a reason to be concerned. Barely sneaking past a team you’ve historically owned, with a rookie QB making his NFL debut was a great way to prove all the critics right. Let’s compare some general football wisdom against rabid Pats fans’ logic as we look back on the 23 – 21 NE “victory.”

General Football Wisdom: You can’t replace your four top offensive targets and expect to keep winning. Losing Welker, Hernandez, Gronk and Branch will have an effect.

Rabid Pats Fan Logic: What? Brady makes receivers and we still got Brady. And we replaced the old and tired Welker with the younger, speedier Welker 2.0 (Danny Amendola).

Reality Check: Amendola has played 60% of the games in the last two seasons. He played just over 60% of the week one game. Brady did not make stars out of Thompkins, Boyce or even Sudfeld. In fact, Brady only completed 55% of his passes. Note that the rookie, EJ Manuel, completed 66% of his passes.

The Upshot: When he was on the field, Amendola looked good and came up big when it mattered. But you still can’t count on him to actually be on the field. Edelman looked more like Welker 1.1, but that might be enough, especially with a decent running attack.

Which brings us to the next point.

General Football Wisdom: Stevan Ridley is a good runner, but he has a history of fumbling.

Rabid Pats Fan Logic: Ridley is awesome. It’s his year to blossom. Plus we got Vereen, Blount and Boldin. This backfield will dominate.

Reality Check: Ridley fumbled (he wasn’t even touched by a defensive player) and Vereen is lost indefinitely with a wrist injury that requires surgery.

The Upshot: Big time offensive problems loom for New England. A marginal receiving core, a fumble-prone backfield sans the dual-threat in Shane Vereen, and the possible loss of a great blocking TE in Sudfeld (pulled hammy) should see the boys average under 20 PPG over the next few weeks, which means the D needs to man up.

Reality Check: These guys still can’t stop Old Man Jackson. They gave him 67 rushing yards plus an additional 41 receiving yards. He continues to own the Patriots (remember 80 rushing and 60 receiving yards last year? How about 74 and 87 two years ago?). Plus they completely failed to pressure a rookie QB. Zero sacks. Deflating.

The Upshot: They did create some turnovers and Fred Jackson only plays for the Bills. The secondary did a decent job, but sadly they still can’t find a way to knock around the quarterback. These guys don’t look that seasoned (or talented).

Settling in to watch the game, I ran into a fellow com-Patriot. I asked, “You worried about this game?”

His response, “Nah, we got this in the bag. It’s Buffalo.”

I noticed he was gone by halftime.

Unlike that football sage Peter King, who has the Patriots winning the Super Bowl (the new MMQB project must be monopolizing his brain cells), I predicted the Patriots to reach 10 wins based solely on the fact that they play in the AFC East. After the Week 1 performance, I’m not even sure that’s a benefit. I also have them losing in the first round of the playoffs to whomever they draw.

This week against the Jets—short week, minus two more offensive weapons—the Patriots are in real danger of losing this game. I think they win 17 – 14, but could easily see it going 19 – 17 for the Jets. Ultimately, the Pats have to hold the Jets under 20 points to win this game.

Seriously, unless everyone stays healthy from here on out and Gronk actually plays through the playoffs, this team is one and done.

But, hey, at least we’re not the Steelers.