For my latest trip to New Orleans I was challenged to eat gumbo at every restaurant I visited. I took the bait. Given how much I love gumbo, it was truly an offer I could not refuse. So for those of you who also love this tasty little dish, here’s the lowdown. (Please excuse some of the blurry photography—in my excitement to get to eating, I may have lost a little control over my motor skills.)

I arrived in NOLA at 10:30 am and immediately started in on my mission. Legend’s was the only sit down restaurant serving food at that hour, so I began my challenge with a bowl of their sausage and chicken gumbo. I wasn’t expecting much, so I was pleasantly surprised by the tender and plentiful chunks of chicken and sausage, as well as the spicy kick. The sauce consistency was thicker than most gumbo I’ve eaten which made it more stew than soup. If you’re ever at MSY, and craving some gumbo, I’d recommend a bowl at Legend’s.

Pat O’Brien’s is famous for their hurricanes, a very tasty adult beverage, which makes them a very touristy place to go in NOLA. However, despite being a tourist mecca, the gumbo at Pat O’Brien’s was probably the best I had on my trip. Rich and smoky, the sauce oozed the essence of Cajun cooking. Add in spicy andouille sausage and shredded chicken and this was a gumbo to offset any effects from too many hurricanes. 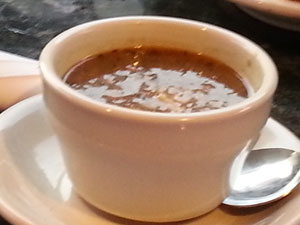 Pier 424 Seafood Market sits amid the chaos that is Bourbon Street. Sitting outside on the second level deck, it was a great place to watch the drunken revelers stagger down Bourbon Street—while enjoying a nice cup o’ gumbo. Pier 424’s gumbo was eerily similar to Pat O’Brien’s gumbo in sauce flavor and texture, but theirs had the added bonus of baby shrimp thrown into the mix. (Well, duh, it’s called Pier 424 Seafood Market.) Still, given the choice, if you find yourself on Bourbon Street, I’d stagger a little further on down to Pat O’Brien’s.

The Original French Market Restaurant & Bar prides itself on its long history in New Orleans. My experience there has certainly proven its stability. I was last in NOLA two years ago, and stumbled across this historical bar. I thought it would be fun to revisit old memories, so I made it a point to stop in this trip. It was like I never left. Upon entering, I found myself being served by the same waitress I had two years ago, while my drinks were poured by the same bartender. Deja vu. The food was the same, too—a good thing. Last trip, I did not have the gumbo, but obviously I had to try it this time. It did not disappoint. A little soupier than my previous bowls, the Original French Market Restaurant & Bar gumbo was still loaded with sausage, shrimp and crawfish. To enhance the flavor, every bowl is served with a full bay leaf, lending it an authentic Cajun flair. 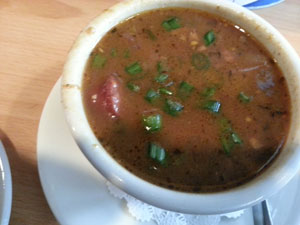 Huck Finn’s is a fun little sports joint on the edge of the French Quarter. Tons of big screen TVs and sports memorabilia, yet somehow not your run-of-the-mill sports bar. The gumbo was good, but not great (though most of the food at Huck Finn’s is pretty darn good, generally speaking). Perhaps it was too much green onion or maybe a lack of rice, but the overall feel on the palette just seemed a little off. Still, the flavor was zesty from the nice chunks of hot peppers and the sausage was sliced extra thick. One other note: if you’re in the mood for a Bloody Mary while in New Orleans, definitely go to Huck Finn’s.

Fiorella’s Cafe is known as a great place to get fried chicken in NOLA (and indeed it was outstanding), but the gumbo was a nice bonus. Served in a huge bowl and with a side of thick-sliced French bread, Fiorella’s gumbo was laden with chicken and sausage. The French bread was perfect for sopping up the excess sauce and tempering the spice. For me it was certainly a great way to cap off the gumbo challenge.

Sadly, my gumbo-fest had to come to an end. However, I am quite pleased to have eaten six bowls on my trip. I would’ve eaten more, but several restaurants I ate at did not serve gumbo. (To those restaurants I say, “C’mon man. You’re in NOLA for Saints sake.”) Perhaps my only regret was not tampering with the gumbo by adding some of the many hot sauces provided. As a guy who enjoys spicy food, I do wonder if adding some extra kick would’ve enhanced some of the gumbos. As a side note, I did try some of the more uniquely-named hot sauces offered, and they were quite hot. And if you’re ever in the mood for spicy goodness, you can always try some of these hot sauces.

If you ever find yourself in New Orleans, maybe my gumbo challenge will give you some options if you’re in the mood for gumbo. I know I can’t wait to get back to NOLA and hunt down more of this Cajun fave I so often crave.