“So let me get this straight. You just woke up and decided to drive to Pittsburgh, from Cincinnati, for a Pirates game?” asked the man sitting next to me at PNC Park Saturday.

To which he just shook his head incredulously.

Looking back, I guess it might seem a little absurd to just get up and go with no planning, at least to any normal person. But it could have been even crazier.

When I woke up Saturday morning around 9:30 a.m., my wife, Jenn, looked over and said, “Let’s go to Chicago.” Not wanting to discuss such a ridiculous notion, I called her bluff.

“Why stop there? Let’s just go right up to Milwaukee and catch the Reds game. We can hit Chicago for lunch on the way home Sunday.” Then I got up and took a shower thinking that was the end of it.

I was wrong. Jenn was seriously considering my suggestion. After further consideration, we decided that Milwaukee was just a bit too far for a weekend jaunt. But now my interest was piqued, so I offered up the possibility of going to Pittsburgh or Detroit for a game.

Using the speed limit as mere suggestion, we blitzed our way through Ohio and into Pennsylvania. Jenn used hotwire.com to book a hotel as we drove and fate rewarded us for our impromptu rendezvous. We got a room at the Westin, one block from two of our favorite places in Pittsburgh, Seviche and The Sharp Edge. By the time we parked, unpacked and left the room it was 3:40 p.m.

We hailed a cab and hit the stadium ten minutes later and immediately sought out the ticket booth. As we were standing in line, a man approached us and asked if we needed tickets.

“There’s no cost,” he replied.

“You have to sit next to me,” and he handed us the tickets and walked off toward the stadium gates.

Two tickets for seats in the middle deck, third base side. Free. We need to buy that guy a beer.

But first it was off to the stadium souvenir shop to get my obligatory ball cap, followed by a quest for food and Yuengling. We finally made it to our seats at 4:20 p.m., only three batters into the top of the first. Mission accomplished.

As it turns out, the man offering us free tickets was a call-in talk show host for Pittsburgh’s KDKA radio station, Robert Mangino. Since I used to work for the radio broadcaster Paul Harvey, we ended up having a lot to talk about. So if you’re reading this Mr. Mangino, thanks not just for the tickets but the great conversation, too. You helped make our Pittsburgh getaway great.

Last year I wrote an article about why major league teams should give me tickets to their stadium, the reason being that every stadium I visited was home to a team that made the playoffs. Maybe you can see where this is going.

Pittsburgh hasn’t made the playoffs in over two decades. Barry Bonds still weighed a buck fifty the last time the Buccos saw October. Don’t look now, but the Pirates are nearly a lock to make the 2013 playoffs. You’re welcome Pittsburgh.

And of course, I’ve been to Great American Ball Park (GABP) to see my hometown Reds and it’s looking good for them in October, too.

PNC Park has the kind of view GABP could have if the stadium was built across the river in Kentucky. Downtown Pittsburgh provides a beautiful, towering backdrop, while the river gives Pedro Alvarez a place to deposit moon shots. 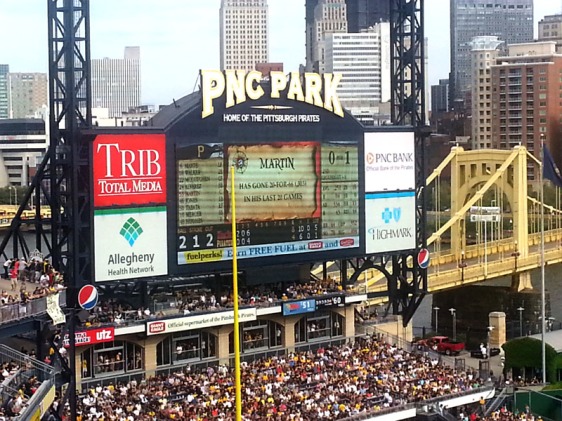 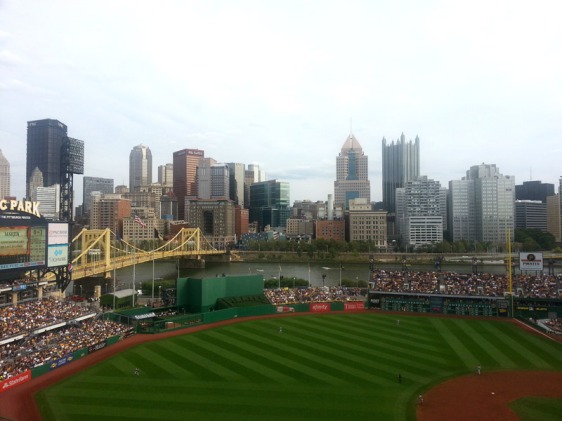 Pretty standard food and beverage selections, especially on the 300 level, though the in-stadium Quaker Steak was a bonus – I do enjoy me some Arizona ranch wings. All the specialty vendors were on the 100 level, so it didn’t really make sense to go all the way back down.

Still, my only real complaint is the lack of cup holders in the seats. Clearly a lot of money was spent on PNC Park; why the penny-pinching on seats without cup holders? Did you get lobbied by the beer vendor union? More spills equal more re-fills and more bills in their pockets?

Despite the colossal butt-whipping Arizona gave the Bucs, the trip was a success, even with our complete disregard for planning ahead. We stumbled into free tickets to a stadium we’ve not visited previously and we met a local celebrity who turned out to be a really nice guy.

We’re coming back, Pittsburgh. No, seriously. We are. See you in November for the Bills/Steelers game.

PS – stay tuned for more on the non-sports side of Pittsburgh: food and other stuff.

One thought on “PNC Park on a Wing and a Prayer”