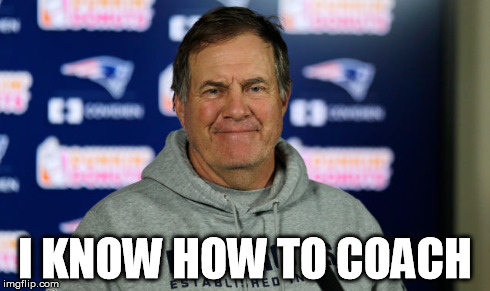 Smug Bill – Look into his eyes

Perhaps Tom (not so) Terrific agrees with my sentiment, uttering this eye-opening statement after the 33-20 shellacking at the hands of the Miami Dolphins, “You can’t go out there and play the way we played today and think you will win a game this season…”

Could the Patriots actually go defeated this year?

It wouldn’t be a first in Boston this year as the last place Red Sox have essentially gone defeated a year after winning the World Series (see standings to the right).

Still, it’s unlikely that a group of veteran players like Vince Wilfork, Tom Brady, Darrelle Revis and Jerod Mayo will fail to produce a victory. But with the horrible coaching schematics and game planning along with obviously under-conditioned players, it could happen.

One has to think the Evil Genius Bill Belichick will move to improve the poor planning that went into creating turmoil in an already weak offensive line (he opted to trade Pro Bowl guard Logan Mankins a week before the season started). Mankins wouldn’t have made yesterday’s game any closer, but maybe playing a consistent set of players instead of rotating so much inexperience in and out of the O line would have.

The Patriots started the game looking good, cruising to a 20-10 halftime lead. Then they proceeded to give up 23 straight points while looking absolutely gassed and overwhelmed, left behind in the (Cameron) Wake of the Dolphins. Pun intended. (This piece is honoring the quality of play produced by the Patriots yesterday, btw.)

The offensive offensive line was not the only problem. As it turns out, Revis Island is located somewhere in the Bermuda Triangle, where incompletions, pass break-ups and interceptions disappear into Mike Wallace touchdowns. And why wasn’t there a game plan for defending against that future HOF running back (read with sarcastic inflection) Knowshon Moreno?

I have a notion that most Pats fans know Knowshon, considering he gashed them for over 200 yards last year while with the Broncos.

And keep in mind the Patriots are heading to the land of Adrian “All Day” Peterson next week. He really is a future Hall-of-Famer and just might break the single game rushing record if he suits up (fantasy owners take note).

Needless to say, the Patriots may want to work on their off day this week and study up extra hard on the Vikings. But after having five months to game plan for the Dolphins, it remains to be seen whether five days is enough time to plan for the Matt Cassel-led Vikes.

The good news is that New England really can’t play much worse than they did in the second half against Miami. So there’s plenty of upside left for the season. I still expect them to win the division, but another performance or two like this one and I’m bailing on that idea faster than Josh Gordon can grab a quick joint, er, car sale (was that too blunt?).

Stay tuned for more glowing reviews of the 2014 Patriots as the season progresses. For the record, I plan to conduct a little experiment during next week’s game by standing barefoot on a pile of glass shards during the Patriots game. We’ll see what hurts less, the Pats play or the glass.

Or maybe it’s just your eyes that hurt…from reading this.