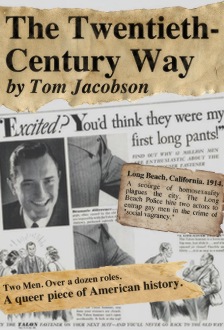 I was invited to a production of “The Twentieth-Century Way” at the Know Theatre of Cincinnati this past weekend. Starring Jens Rasmussen and Michael McKeogh, this two-man play is a whirlwind of activity designed to answer the question, “Who am I, really?”

In order to answer the question, the playwright, Tom Jacobson, has his characters don masks (in the form of improvisational role-playing as part of a movie audition) to reveal their true selves. While not a novel concept, Jacobson uses it effectively and the actors displayed his vision veraciously.

You can read reviews of the script to get the full story elsewhere. Here’s what you really need to know.

It’s funny. There is a nice blend of physical comedy, laugh-out-loud moments, and subtle quips – all which help swallow the heaviness at the heart of the play.

It’s at times graphic, but don’t let the homosexual nature of the play distract you from its heart. If you are put off by man-on-man action (as I am), some moments are tough to watch. But this play is not really commentary on homosexuality – it’s merely the vehicle Jacobson uses to make his point.

And finally a word of caution (and possible spoiler alert):
MEN GET NAKED AND TOUCH. After watching the play my mind went to the scene in Role Models where Kuzzik says, “Now let us gingerly touch our tips.”

They might have kissed, too, but my eyes were averted by that point (plus the technical director was kind enough to dim the lights quite severely).

Now that you know the pros and cons, go see it. The Know Theatre warrants support for bringing in two wonderfully talented actors.